Who is Ellen DeGeneres?

Well, that's a pretty stupid question coming from me, but still, let's take the time to talk about Ellens' wonderful background.

Ellen DeGeneres is an American comedian, television host, actress, writer, and producer. She starred in the popular sitcom Ellen from 1994 to 1998 and has hosted her syndicated TV talk show, The Ellen DeGeneres Show, since 2003.

Her stand-up career started in the early 1980s and included a 1986 appearance on The Tonight Show Starring Johnny Carson. As a film actress, DeGeneres starred in Mr. Wrong (1996), EDtv (1999), and The Love Letter (1999), and provided the voice of Dory in the Pixar animated films Finding Nemo (2003) and Finding Dory (2016); for Nemo, she was awarded the Saturn Award for Best Supporting Actress, the first time an actress won a Saturn Award for a voice performance. In 2010, she was a judge on American Idol for its ninth season.

And we can keep talking the whole day about Ellens' career, which is quite long of course because it takes years and a lot of hard work to own a trofe collection made of 97 pieces. Still, this is not the point of today's article.

What's in her watch collection? 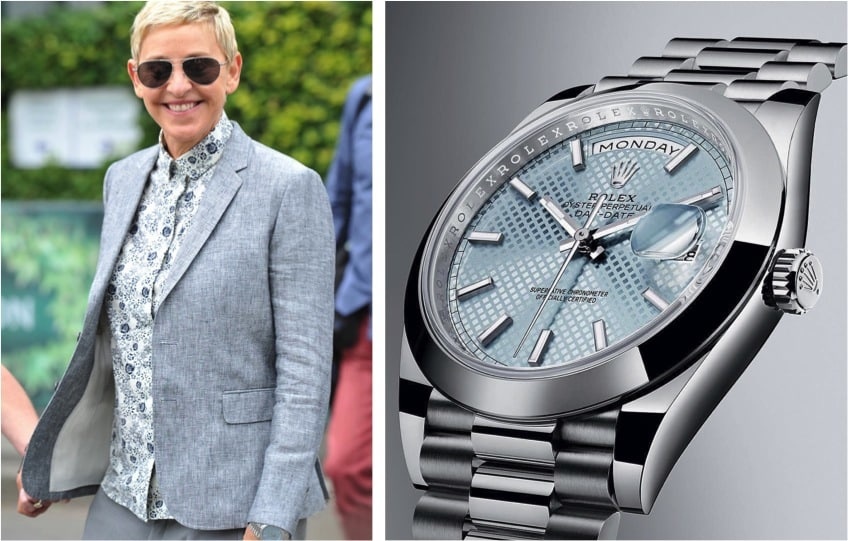 The Datejust was first created in 1945 and featured an 18-carat yellow gold case. Over sixty years later, the same model has now adapted to the times and is also available in platinum and white gold. Ref. 228206 features an elegant platinum smooth bezel and a unique glacier blue patterned dial. If it is possible for a watch to remind you of a season, then this undeniably represents winter. 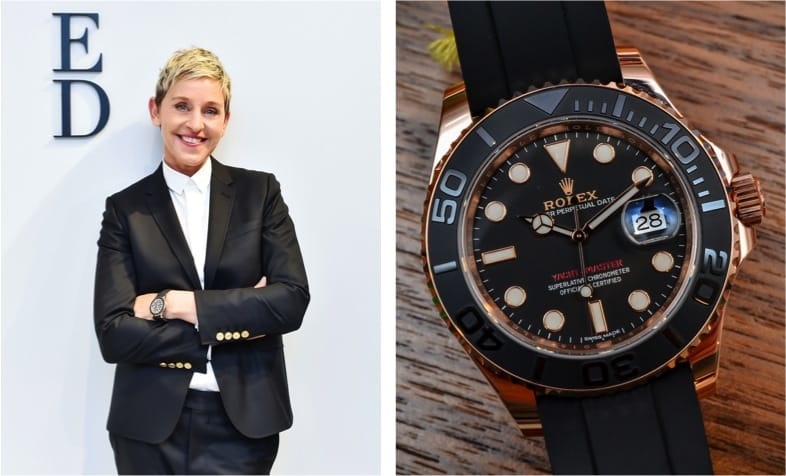 The Rolex Yacht-Master 40 Everose is a favorite among those who prefer a watch with some contemporary appeal. The rose gold case features a matt black sandblasted bezel and an iconic Rolex black dial with large luminous hour markers. The relatively new piece was released in 2015 and features Rolex’s new Oysterflex bracelet, which allows for increased comfort and more movement. 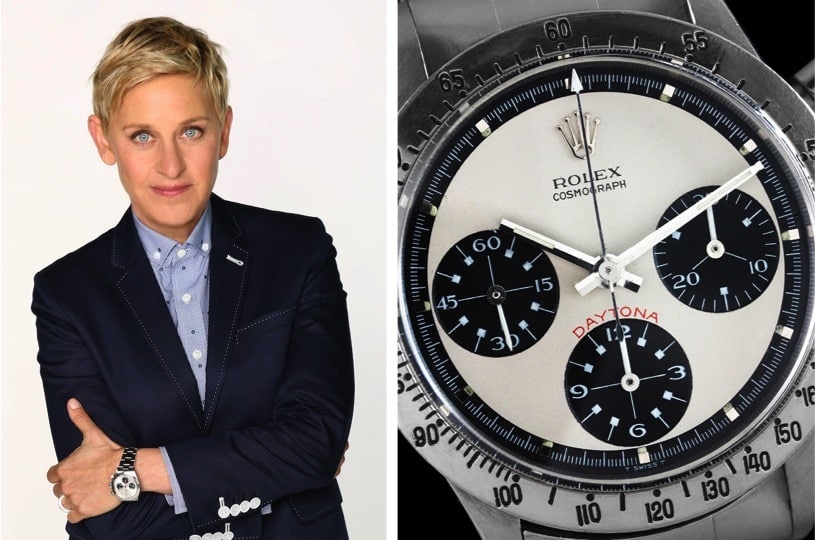 Probably one of the most sought after models of our time is the Cosmograph Daytona. While it’s obvious that Ellen enjoys her modern watches, she also seems to have a soft spot for vintage too. Ref. 6262 features a stainless steel case and that all-important cream ‘Paul Newman’ dial.

Located at two and four o’clock are two steel pushers that activate and reset the sporty chronograph function. Ellen owns a huge variety of Rolex Daytona’s in all kinds of metals including yellow gold, bi-metal, rose and steel. That’s one hell of a collection! 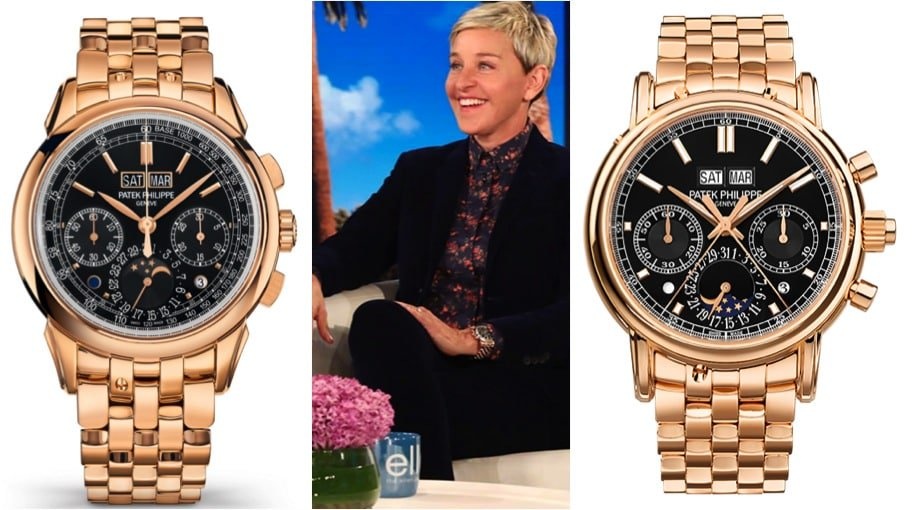 Ellen clearly likes to keep things interesting. Although she owns her fair share of sporty steel watches, she also collects some pretty stylish dress watches too. Below, she is pictured wearing ref. 5204/1R-001 (enlargement on the right). I have also included one of the newest members of the Grand Complications family, ref. 5270/1R (enlarged on the left), because the two are almost identical in appearance.

Both feature an 18-carat rose gold case, the exclusive rose gold “Gouette” bracelet” and black dials with chronograph subdials, perpetual calendar display and day/night indication. The pieces also exhibit day, month and date indication, so pretty much everything you need to know when out and about. 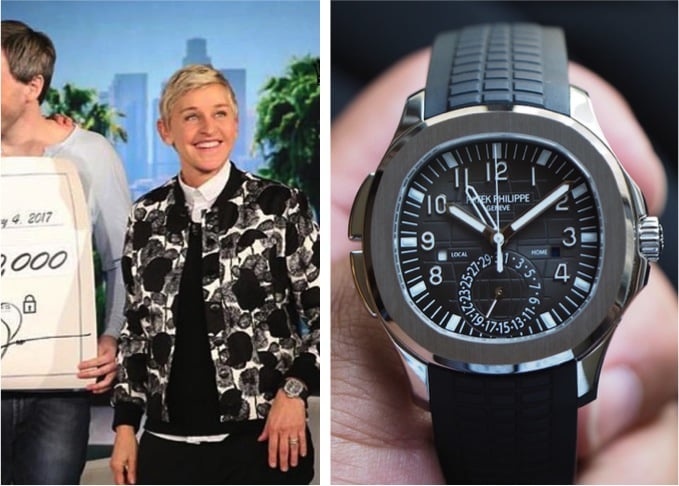 Concluding this brief list is ref. 5164A. Designed to be the perfect travelling companion, the Aquanaut travel time features a 40mm stainless steel rounded octagon case, and a “tropical” strap ultra resistant to saltwater and UV radiation.

The black embossed dial features gold applied Arabic numeral markers and dual time display with local and home time indication. At £26,050 it’s one of the more affordable Patek’s on the market, and yet probably one of the most underestimated!

All of the watches above may belong to Rolex and Patek Philippe, but that’s not to say that DeGeneres entire collection does. The comedy legend also collects from Audemars Piguet, Omega and many more luxurious brands. This lady will always be known for her successful career, but we will always remember her for that crazy watch collection.

Interested in putting together a killer collection of your own? Then browse through our new arrivals now!