Tudor Black Bay is easily one of the most popular diving watches available today, combining excellent vintage scenery, great origins, and great finish. Both of these are great, but a black frame seems like the obvious place to start, being the most universally accepted design. Tudor finally answered the call of her fans and released this Black Bay Black. Is it the best Black Bay yet? How does it compare to the brand’s other famous dive watch, the Tudor Pelagos? Read on to find out. 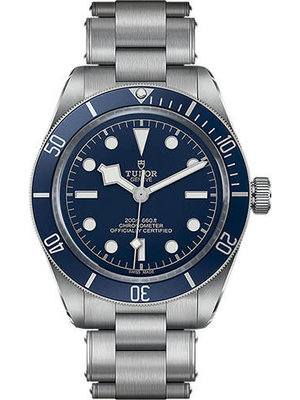 To say that Black Bay has been a hit in the diving viewing community is an understatement. Black Bay is quite possibly the single most popular model in the entire company portfolio. It is only natural, then, that they release many versions of it to reach the widest possible audience. Today we are seeing the third personification, Black Bay Black.

Tracing the origins of the Black Bay is not an easy task. For one thing, the name of the watch was changed, in a sense, to its reprint. You may know him better by the name of his predecessor, the Submariner.

The other reason it is difficult to trace the history of the Black Bay is that even though its ancestor is clearly a Submariner, it is not really a special Submariner. Instead, think of Black Bay as a sort of Submariners' "Greatest Hits" album, combining the iconic features of the original '54, Big Crown '58, and Snowflake '69. Also more true to its origins than its contemporary, the Pelagos, using 2824 proven and affordable compared to the MT-5612 interior. 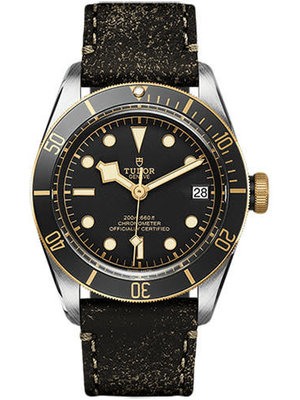 Most viewers may be tempted to say that the dial comes down from Snowflake while the box and frame come from the original Tudor Submariner, but that would be a mistake. Like the rest of the watch, it is a combination of different elements.

The best way to illustrate this is a look at the minute and hour markers. Clock markers, for example, involve rectangles, circles, and triangles, just like the ’54 model, while the original Snowflake used squares instead of circles. The gold-painted minute track around the dial is very reminiscent of the first Tudor Submariner, being connected from the outside with a painted circle. In the snowflake, conversely, those ticks would not climb into a circle but came straight from the outer perimeter of the dial.

From this angle, you can evaluate the applied markers, which contain the illumination, and you can also see the subtle curvature of the caller.

The hands are very similar to snow and are the ingredients for which it was named. Snowflake hands are known for their extremely sharp geometry, mostly adding a luminescent diamond shape near the end of the hour and seconds. This approach helped divers to distinguish their hands more easily underwater when compared to the original ones, which shared a very similar shape for hours and minutes.

Black Bay Black has a lot in common with the Black Bay in terms of calling, namely gold accents, though I think it is fair to say that calling the Black and Red Bays are essentially identical. However, this is not true for the blue model, which lacks the golden writing and accents in favor of the steel ones.

The writing itself, as well as the choice of gold accents, probably had to do with the original '54 Submariner that was quite similar. Notice the use of the old Tudor logo, pink, compared to their more modern shield, as was the case in the ’54 model but not the Snowflake.

The shield is also used for its brother, Pelagos, illustrating quite briefly the difference between a contemporary and vintage model within the same company. Another important difference between this and Pelagos is the lack of a date in the Black Bay. 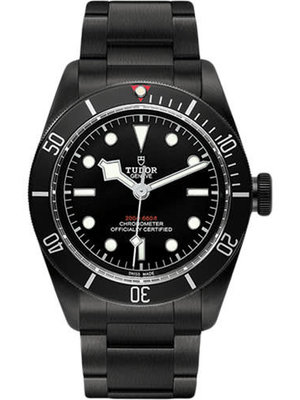 As is often the case with divers, the case is where the true story begins.

The new black bezel is, surprisingly, the one that is most faithful to the original 1954 model, making it an unusual decision to come out last. Still, what a bezel it is. I especially love the red accent on the top. The action of the one-way frame is excellent and quite similar to Pelagos, though I think it is a bit quieter. The effort is fair and there is almost no play between stops.

The case is extremely similar to the 1954 model, except for the crown which we will reach a little later. Unfortunately, I was drawn to compare it to the photos of the original, but to my eye, the design is virtually identical.

The valves are attached to the most conventional Black Bay bracelet which hugs the box. I prefer this bracelet, but those who want their Black Bay to look more like the ’54 model or Just Watch edition can order the Ranger bracelet separately.

What distinguishes Tudor 2824 from ETA 2824? I’ll catch it in a second, but it’s worth mentioning a few points. First, Tudor does not feel the need to disguise its ETA moves like most other companies. The exact movement used is easily found on their website, so I appreciate that there are no smokescreens and mirrors with the brand and also that they are very happy with the ETA movements they use. I have no idea if it is lottery luck or not, but the Black Bay I have examined here is about -0.5 seconds in a 24 hour period. You may not get much from a single sample, but the point is that 2824 is a capable time-tested move and the simple fact that it does not have MT-5612 from Pelagos should not be lamented.

Now, is Tudor 2824 just an ETA 2824 with a different name? No, not so much. Unfortunately, I can not actually see the movement in hours to do a full analysis, but judging by the photos and photos of Tudor himself that I was able to find elsewhere, I see two significant differences. Impabloc shock defense has been replaced by Kif. Unsurprisingly there, Rolex has used Kif blows for ages, although it is unclear to me if this will make any performance changes. Second, the ETA regulation system has been replaced by what appears to be a Triovis fine-tuning mechanism. This is actually a rather radical revision of a movement and probably required the production of some ingredients for this specific purpose. I will keep discussing regulatory mechanisms for another day but suffice it to say that Triovis is favored by a number of reputable companies like Girard Perregaux and Nomos, for example.

The differences are quite clear: with regard to the red pattern, the difference is strictly limited to the transition to a black frame with red accents and the crown tube is now also matching the black. Regarding the blue interpretation, these variations are also found, as well as a shift in accents of the gold call instead of silver. The question is, which is better? I tore a little myself. I love this black frame and its delicate red accent, but I also prefer the blue patterned markers and silver hands. Really, for my money, it is about as roughly a draw as you can get. Forced to make a decision, I guess I would go with the blue Bay, but not without much consideration. After all, unless it is already visible from the limited edition Timeless Nomos watches, I am a pretty big fan of the color blue.

After all, Black Bay Black is a very good diver, especially for fans of vintage-style watches. This one hits all the right notes and has a ton of great legacy behind it, basically merging Tudor's favorite elements of all their historic Submariner models. None of the three Black Bays, I think, is as successful at doing this as this black bezel model, which closely resembles the 1954 Submariner. If you like how it looks, I would definitely make it a serious consideration for your next diving hour.